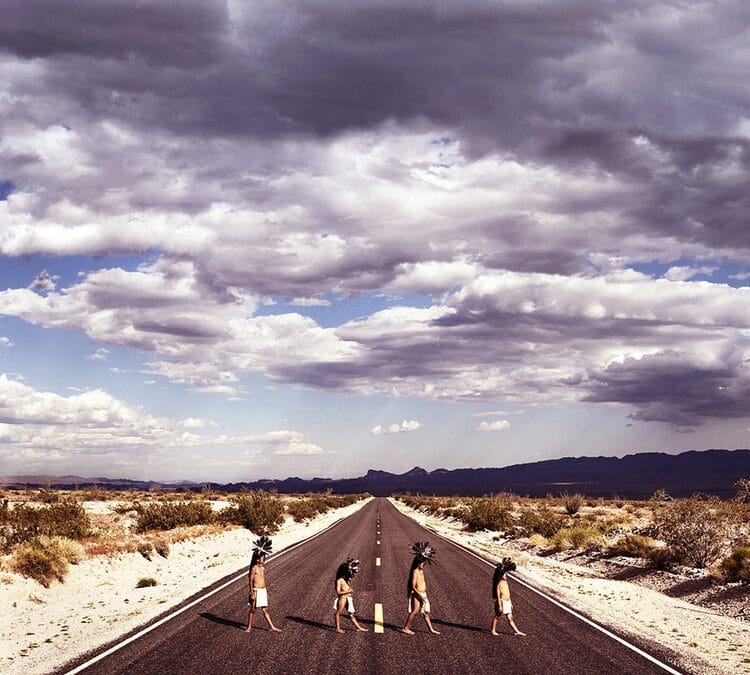 One shows four young Chemehuevi boys crossing a desert road. It is a 2019 work by Cara Romero (Chemehuevi, b. 1977) and is titled 17 Mile Road.

Romero’s work reflects her diverse training — in film, digital arts, fine art, journalism, editorial portraiture, and commercial photography. Since 2006, she has won multiple awards at both SWAIA Santa Fe Indian Market and at the Heard Museum Guild Indian Fair. 17 Mile Road was shot in the heart of the Mojave Desert and it references the iconic August 1969 image of the Beatles crossing Abbey Road. A video record of the making of this photograph is included in the PBS-TV “Craft in America” IDENTITY episode (premiered December 27, 2019). 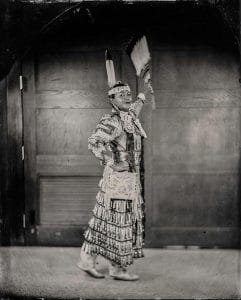 The other photo is the work of Will Wilson (Navajo [Diné], b. 1969). It is titled Madrienne Salgado, Jingle Dress Dancer/ Government and Public Relations Manager for the Muckleshoot Indian Tribe, Citizen of the Muckleshoot Nation. The photo was taken in 2017 and printed in 2020.

Wilson was born in San Francisco but spent his childhood on the Navajo Nation. He attended a government boarding school in Tuba City before receiving a scholarship for a Massachusetts prep school. He was an undergraduate at Oberlin College and earned an MFA in photography at the University of New Mexico. Wilson is known for monumental installations in museum settings and he rarely creates small prints. This print was sold to benefit the Ralph T. Coe Center for the Arts in Santa Fe, where he is a Board member.

Wilson’s ongoing Critical Indigenous Photographic Exchange (CIPX) project employs a wet-plate collodion photographic technique — based on the 19th-century method that involves exposing and then developing a plate that has been coated in light-sensitive chemicals. He pushes the CIPX project even further with the inclusion of “Talking Tintypes,” which use AR technology to bring photographs to life via a downloadable app. (Try it now and watch Madrienne Salgado perform the Jingle Dance. Currently available for Apple only.)

The Jingle Dance was born of a vision that came as a partial result of the effects of the 1918 Spanish Flu pandemic, and its purpose is as a healing dance. During 2020, jingle dancers have begun making videos of themselves dancing to help heal the world. The dancers show pride in themselves, their communities, and their heritage, and they do this while praying for the health of all people.