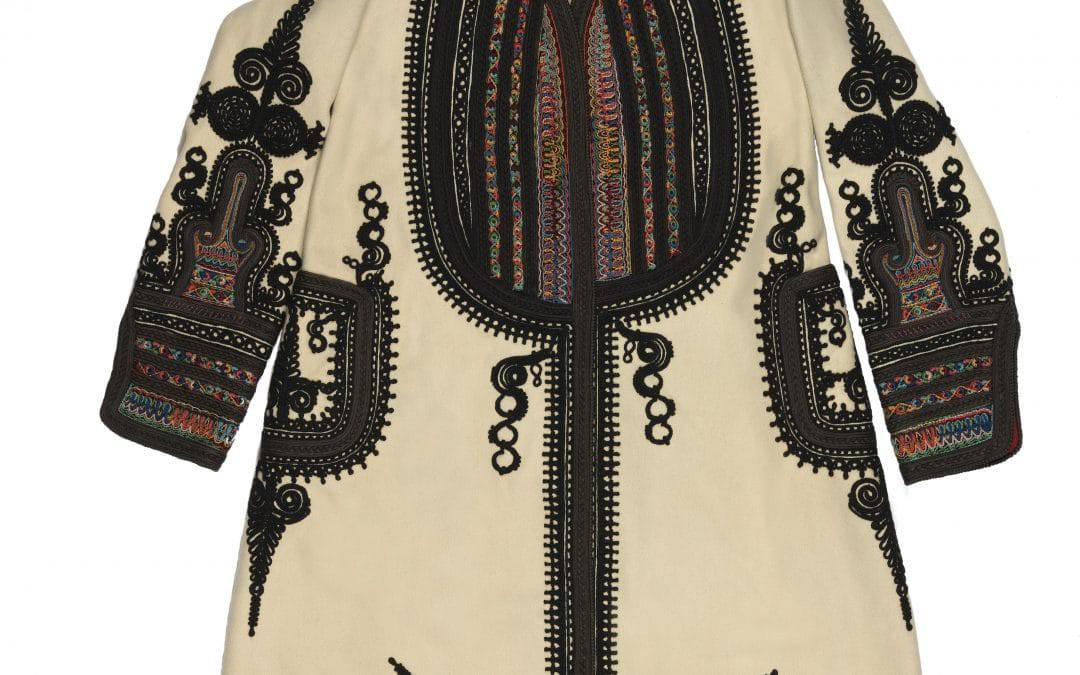 (GOLDENDALE, Wash., January 31, 2020) — Maryhill Museum of Art will open for the season on March 15, 2020 with the exhibition A Particular Beauty: Romanian Folk Clothing. The exhibition will run through November 15, 2020. It is drawn almost exclusively from the museum’s collection of Romanian textiles, which has its roots in an early gift from Queen Marie of Romania. Over the years, the museum’s holdings of Romanian textiles have grown to include more than 450 objects, some of which will be displayed for the first time in this exhibition.

A Particular Beauty will feature 20 fully dressed mannequins and numerous individual garments including coats, chemises, blouses, and vests. The exhibition will showcase a remarkable variety of Romanian embroidery techniques, mediums, and styles that have evolved through the influences of adjacent ethnic populations, resident invaders, other outsiders, and—in recent decades–urbanization. Contextual labels and photographs will tie the objects to specific villages, counties, geographical regions, and artisan workshops.

“This marks the first time that we have mounted an exhibition of this scale of Romanian textiles,” says Curator of Art Steve Grafe. “It will give the public an opportunity to see many objects that we have recently acquired as well as pieces that were gifted to the museum when it was first established.”

A Particular Beauty: Romanian Folk Clothing will be accompanied by a 32-page color publication (available in Summer 2020) as well as numerous education programs throughout the season.

Images for use by the media are available for download here. For media inquiries, please email our PR department here.

Members and friends of Maryhill are invited to preview the season’s new exhibitions, including A Particular Beauty: Romanian Folk Clothing, enjoy a film screening and a reception with Romanian foods. Museum doors open at noon.

Film Screening: Marie—Heart of Romania | 2 p.m.
A documentary exploring the life and legacy of Queen Marie of Romania.

Wednesday, June 24, 2020 | 1 to 4 p.m.
International Day of the Romanian Blouse
A celebration of Romanian textile traditions with hands-on activities for all ages. Free on the east ramp of the museum.

In the museum’s M.J. Murdock Education Center visitors can also explore the exhibition “Queen Marie of Romania – The Irresistible Ambassador of Romania,” from March 15 – April 10, 2020. The display is on loan from Alianta in Washington D.C., and features 40 photographic panels and text about Queen Marie. 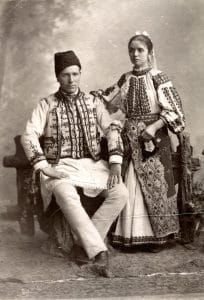 Romanian folk dress varies from region to region, from village to village, and with the unique expressions of individual artists. Prior to the 1940s, three-quarters of Romania’s citizens lived in agrarian environments, and rural villages were considered the “cradle of folk art and culture.” Over time, traditional clothing forms remained constant, but they were adorned with a wide array of embroidered embellishments that have evolved over time through a variety of influences.

Rural women traditionally made a family’s clothing. Their tasks included spinning, weaving, sewing, and embroidery using hemp, cotton, flax, wool, and rough silk. The foundation of feminine attire is a white chemise (cămaşă). This can be either a one-piece garment (long-sleeved blouse and underskirt) or two separate pieces—a blouse (ie) and an underskirt (poală). The universally white chemise serves as a background onto which embroidered designs are worked in colored wool, silk, or cotton thread, typically in geometric motifs. Recent creations also display stylized floral patterns, some of which are worked in beads. A skirt (fotă) or apron (catrinţă) is generally worn over the chemise and tied at the waist with a narrow fabric belt (brâu). Skirts and aprons usually show woven geometric patterns and the amount of overall ornamentation is dictated by how the costume is worn and the affluence of the wearer. Women wear colored scarves, felt hats, or straw hats on their heads, and long scarves and veils are also common, especially on festive occasions.

Traditional Romanian men’s clothing usually combines a white chemise with light-colored trousers (cioareci). The length of the chemise varies from one region to another, but it generally covers the thighs and is tightened at the waist with a wide woolen sash or leather belt (chimir). Summer clothing is made of lightweight fabric while winter clothes utilize coarse woolen fabric. Depending on the locale and time of year, masculine headgear can include lambskin hats (căciulă), black felt hats, or straw hats. Both genders wear coats, jackets, and vests made of sheepskin, wool, and velvet, and footwear can include sandals, high-top shoes, and boots. Subtle changes in attire signal the relative age, and economic and social status of both men and women.

THE LEGACY OF ROMANIAN TEXTILES AT MARYHILL MUSEUM OF ART
In 1926, Queen Marie of Romania visited her good friend Sam Hill to dedicate the yet unfinished Maryhill Museum of Art building. The same year Queen Marie gave one of the initial gifts to the museum’s fledgling collection, a donation that included personal items, Romanian folk pottery, Russian icons, and diverse textiles—objects she described as “simple gifts, made by simple hands; embroideries and handiwork in wood and metals.”

Queen Marie’s interest in traditional Romanian garments was kindled in 1893, soon after her marriage to Prince Ferdinand (later King Ferdinand I) of Romania. It was then that she began wearing peasant-inspired clothing from Romania’s southern provinces. This fashion choice was the continuation of a trend that began with her predecessor, Elisabeth, Queen of Romania. During her reign as queen, Elisabeth founded a school dedicated to the production of rural Romanian crafts. She also began wearing ethnic attire from some of Romania’s more affluent southern villages. Woman at court eventually adopted similar garb, as did Crown Princess Marie and many in her circle. The finely embroidered garments worn at court and by upper-class Romanians were influenced by vernacular aesthetics and earlier Byzantine textiles. As the style evolved, Romanian folk garments became visible symbols of national identity and important economic exports—especially after World War I.