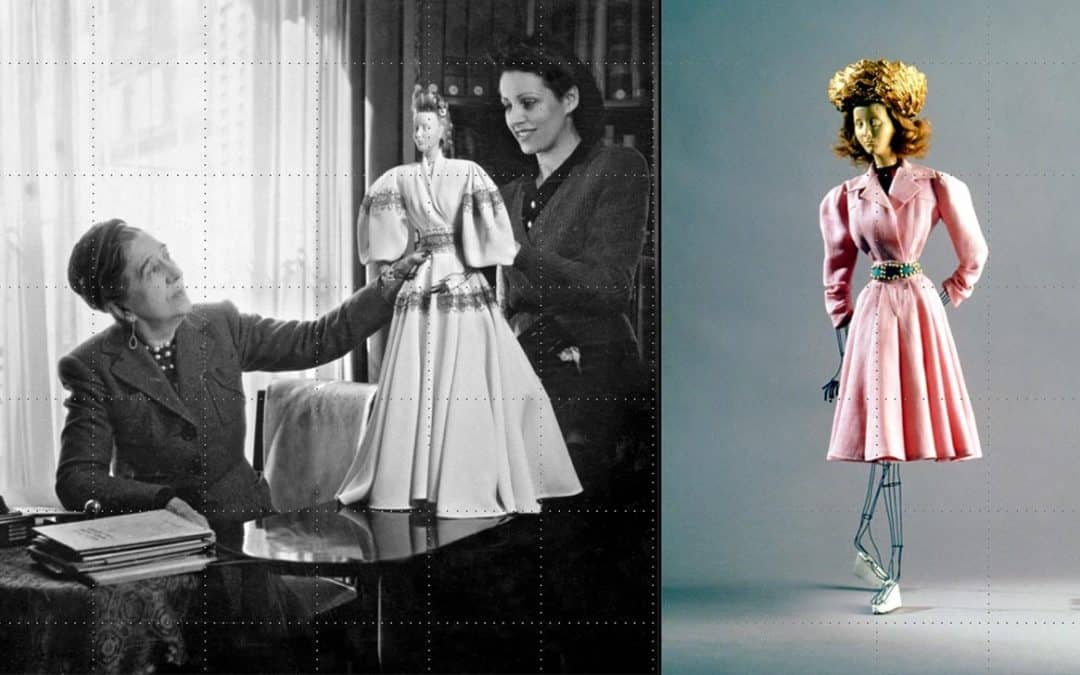 In the photo above, couturier Jeanne Lanvin (French, 1867–1946) and an assistant appear with a 1945 Théâtre de la Mode mannequin. Lanvin’s career as a couturier began in 1909, when she joined the Syndicat de la Couture. Many of her early designs were inspired by her daughter and made for children. She soon expanded into adult clothing and eventually created work for numerous high-profile clients.

During the 1920s, Lanvin’s business empire expanded to include a dye factory and shops selling men’s clothing, furs, lingerie, and home décor. Her much acclaimed parfumerie—Lanvin Parfums SA—was established in 1924.

Lanvin contributed designs to the 1945 and 1946 editions of the Théâtre de la Mode. At right in the image is one of her creations from the 1946 Théâtre de la Mode that is now in the collection of Maryhill Museum of Art. It is a day dress in pale pink linen with a rough woven straw hat that was also her work. The coiffure is by Rambaud; the original shoes (by Hellstern), handbag (by Lanvin), and gloves (by Faré) are now missing. This mannequin was displayed in New York and San Francisco during 1946 as part of André Dignimont’s The Street Fair décor.

Aficionados of fashion and fashion history are generally familiar with the story of the Théâtre de la Mode, the circumstances surrounding its creation in post-war Paris, its travel to diverse European and American cities, and its serendipitous arrival at Maryhill Museum of Art. Here that story is retold using vintage narratives, including texts from the catalogues of the 1945 London Théâtre de la Mode exhibition and its 1946 New York presentation, and from the museum’s own archives.

About the Théâtre de la Mode

Maryhill Museum of Art’s permanent display of Théâtre de la Mode presents post-World War II French haute couture fashions on one-third-life-size human mannequins. When it appeared at Louvre’s Museum of Decorative Arts in 1945, the Théâtre de la Mode opening drew 100,000 visitors. The exhibition toured Europe and the United States in 1946, before languishing in the basement of San Francisco’s City of Paris department store. The sets were lost, but the mannequins were saved through the efforts of Alma de Bretteville Spreckels, who championed their transfer to Maryhill Museum of Art.

Maryhill is home to nine re-built sets and restored mannequins dressed in period casual and formal wear. Each year, three of the nine sets are on display.

In 2021, the sets and mannequins on view include André Beaurepaire’s “La Grotto Enchantée” (The Enchanted Grotto); Jean-Denis Malclès’ “Le Jardin Marveilleux” (The Marvelous Garden); and André Dignimont’s “Palais Royale.” All of the sets are based on original designs and were recreated by Anne Surgers in 1990.