“Hand Made in Rumania”: Romanian Textiles at Maryhill Museum of Art 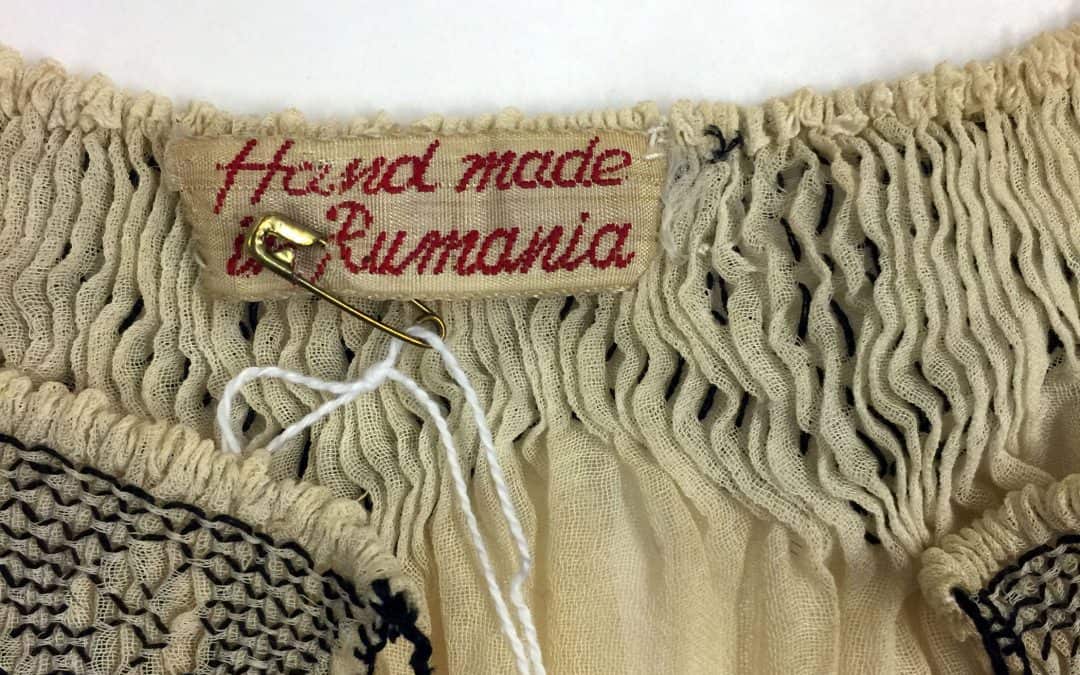 One fact of museum life is the need to plan ahead. Although Maryhill Museum of Art is only three months into its 2019 season, we are actively developing our 2020 displays. Next year’s major changing exhibition is titled A Particular Beauty: Identity in Romanian Folk Dress. The show will feature 18–25 mannequins wearing historic folk clothing from throughout the country — as well as individual blouses, vests, coats and other garments.

Recently three consultants were at the museum evaluating our Romanian holdings for possible inclusion in the upcoming exhibition and accompanying publication. The group included Susan Marrant, an anthropologist, fiber artist and arts educator who has conducted extensive textile-related research in northern Romania; Dr. Joel Marrant, a Romania specialist who taught anthropology at Linfield College from 1978–2007; and Simona Laiu, who is completing an MLA at Stanford University. For the last 18 years, Simona has been owner of Gradina Hestiei, through which she researches and promotes 19th and early-20th-century Romanian folk textiles. A fourth consultant was unable to attend the meeting: Dr. Ronald Wixman, who is Professor Emeritus of Geography at the University of Oregon. Funding for the consultant meeting was provided by the Romanian American Society and Comfort Inn Columbia Gorge in The Dalles, Oregon.

Romanian folk arts have been a part of Maryhill Museum of Art since the institution’s inception. Queen Marie of Romania (1875–1938) is credited with being one of the museum’s Four Founders. As Romanian crown princess (1893–1914), Marie of Edinburgh (later Queen Marie) began wearing peasant-inspired clothing from Romania’s eastern provinces. Maryhill’s interest in Romanian folk clothing has its roots in this fashion choice.

After the Great War ended, Queen Marie made an unofficial trip to the Paris Peace Conference. She traveled there during the spring of 1919 to encourage France, Great Britain and the United States to honor the promises they had made when urging Romania to join the Allied cause against the Central Powers. Her efforts ultimately resulted in the creation of Greater Romania—a political entity that added Bessarabia, Bukovina and Transylvania to the existing Kingdom of Romania and roughly coincided with the placement of Romanian-speaking people in southeastern Europe.

Queen Marie was a long-time friend of Loïe Fuller. During the queen’s stay in Paris, Fuller brought Sam Hill — who was in Europe visiting his friend, King Albert of Belgium—to meet her. Shortly after her return to Bucharest, the Queen requested that Hill visit her there. Hill and Queen Marie maintained a correspondence and in 1926 she came to North America to dedicate the as-yet-unfinished Maryhill Museum of Art.

During her 1926 visit, Queen Marie gave the museum nearly 100 objects. These included photographs, personal items, Romanian folk pottery, Russian icons and some select textiles—objects she described as “simple gifts, made by simple hands; embroideries and handiwork in wood and metals.”

Many of the museum’s other Romanian objects were acquired from Queen Marie by Alma Spreckels. The women first met in 1922, when Spreckels and Fuller visited Pelişor Castle in Sinaia, Romania. Spreckels told Queen Marie about her plans for creating San Francisco’s California Palace of the Legion of Honor as a memorial to the California men who had died during World War I. She then purchased for the museum a quantity of gold-colored furniture like that used in the castle’s “Golden Room.” Six months later, Queen Marie promised to donate a collection of royal mementos, including a replica of the crown she had worn at her 1922 coronation. The California Palace of the Legion of Honor ultimately elected not to create a Romanian Room or accept the donation of the gold furniture. Spreckels tried to sell the furniture to Hill and after his death she loaned, then gave it to Maryhill.

More than 90 years after Queen Marie’s initial donation, Maryhill Museum of Art’s Romanian folk textile collection numbers more than 450 items. This important aspect of the museum’s identity was featured prominently in the 2001 exhibition Uncommon Threads: Textiles from the Permanent Collection, and it was the sole focus of A People’s Legacy: Romanian Folk Life through Dress, Textiles and Art (2006).A Particular Beauty: Identity in Romanian Folk Dress continues that tradition.

Image at top: A blouse marked with a rare “Hand Made in Rumania” label—the only one in Maryhill Museum’s collection.