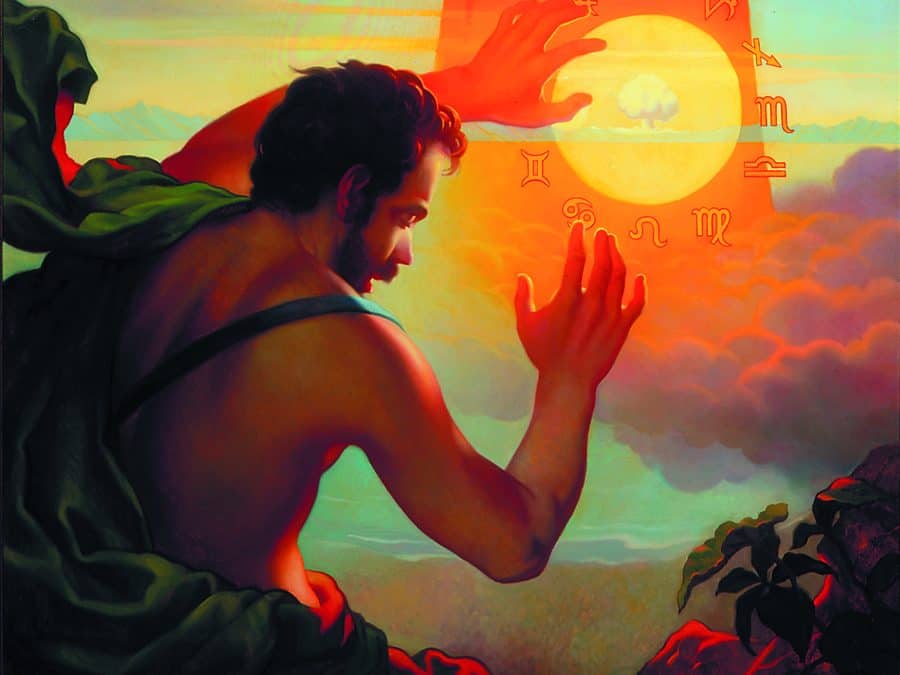 (GOLDENDALE, Wash., June 22, 2018) — A special exhibition featuring 40 works by Richard F. Lack (1928–2009), one of the most significant and prolific American realists of the last half of the 20th century, is on view now at Maryhill Museum of Art.
Richard F. Lack: The Interior Journey—Paintings, Drawings, and Studies showcases a series of large-scale imaginative paintings by one of America’s foremost realist painters. Created at the end of the artist’s career, the paintings depict historical, religious, mythological, allegorical and symbolic subjects. The exhibition also includes a selection of conceptual and developmental sketches and drawings, offering a window into Lack’s creative and technical processes as he fine-tuned the figures, expressions and subtle gestures found within the finished works.
“What I’m hearing from visitors is that they find the exhibition simply beautiful,” says Maryhill executive director Colleen Schafroth. “They are telling us that the exhibition is a pure joy to experience. Lack really is more than a painters’ painter—he is a modern master of paint—by any standard. His skill with a brush is just stunning.”
About the Artist
Lack’s interest in classical painting traditions led him to the atelier and studio of R.H. Ives Gammell, a well-known Boston artist with whom he studied during the early 1950s. It was there that Lack was exposed to the fundamentals of training based on French ateliers and began to explore so-called “imaginative painting,” – a term used to describe historical or poetic painting. In 1955 Lack traveled to Italy, Germany and France to study the Old Masters, particularly Peter Paul Rubens, who greatly influenced Lack’s style and methods.
In 1969 Lack established his own studio – Atelier Lack – where he continued the age-old tradition of mentorship and teaching methods passed down from the European masters of realist painting. Lack’s atelier provided link to the artistic traditions of Europe that rapidly disintegrated after World War I. Over the years, he trained a significant group of younger artists and his atelier became a model for many small studio schools throughout the United States and abroad. Lack’s artistic influence spread even further through his writings on the subject of realism at a time when the art world was enamored with emerging, nontraditional art forms.
Over his 63-year career, Lack created more than 1500 paintings, drawings, sketches, etchings, woodcuts and watercolors, including portraits, interiors, genre paintings, imaginative paintings and landscapes. He was a sought after portrait artist who completed six portraits of the Kennedy family in Hyannis Port, Massachusetts. During his final years, Lack devoted most of his time and energy to painting The Interior Journey series of imaginative paintings now featured at Maryhill Museum of Art.
Richard F. Lack: The Interior Journey—Paintings, Drawings, and Studies was curated by Stephen Gjertson, with assistance from The Atelier and the Lack Estate. Gjertson is a Minneapolis-area artist who was a student of Lack and a former teacher at his atelier.
On view concurrently at Maryhill is a small exhibition titled American Classical Realism featuring work by other influential realists, including R.H. Ives Gammell, Robert Douglas Hunter and Samuel Rose, all drawn from the museum’s collections.

###
ABOUT MARYHILL MUSEUM OF ART:
Housed in a glorious Beaux Arts mansion on 5,300 acres high above the Columbia River, Maryhill Museum of Art opened to the public May 13, 1940 and today remains one of the Pacific Northwest’s most enchanting cultural destinations. The museum was founded by Northwest entrepreneur and visionary Sam Hill, who purchased the property and began building the house with dreams of establishing a Quaker farming community. When that goal proved untenable, Hill was encouraged by friends Loie Fuller, Queen Marie of Romania, and Alma de Bretteville Spreckles to establish a museum. Maryhill Museum of Art boasts a world-class permanent collection, rotating exhibitions of the highest caliber, and dynamic educational programs that provide opportunities for further exploration by visitors of all ages. On view are more than 80 works by Auguste Rodin, European and American paintings, objects d’art from the palaces of the Queen of Romania, Orthodox icons, unique chess sets, and the renowned Théâtre de la Mode, featuring small-scale mannequins attired in designer fashions of post-World War II France. Baskets of the indigenous people of North America were a collecting interest of Hill; today the museum’s American Indian collection represents nearly every tradition and style in North America, with works of art from prehistoric through contemporary.  Maryhill’s William and Catherine Dickson Sculpture Park features more than a dozen large-scale works by Northwest artists. The Maryhill Overlook is a site-specific sculpture by noted Portland architect Brad Cloepfil; nearby are Lewis and Clark interpretive panels. Four miles east of Maryhill is a life-sized replica of Stonehenge, Stonehenge Memorial, which Sam Hill built to memorialize local men who perished in World War I. Nearby, the Klickitat County War Memorial honors those who have died in the service of their country since World War I.The museum was placed on the National Register of Historic Places in 1974. In 2001 the museum was listed as an official site of the National Historic Lewis and Clark Trail and in 2002 was accredited by the American Association of Museums. In 2012 the museum opened the Mary and Bruce Stevenson Wing, a 25,500 square foot expansion that is the first in the museum’s history. The new wing boasts the M.J. Murdock Charitable Trust Education Center, a collections storage and research suite, a new cafe and terrace, and the Cannon Power Plaza with an installation of sculpture, and sweeping views of the Columbia River Gorge and Mount Hood in the distance. VISITOR INFORMATION:

Maryhill Museum of Art is open daily from 10 a.m. to 5 p.m., March 15 to November 15. Admission is $12 for adults, $10 for seniors, $9 for college students with I.D., $5 for youth age 7-18 and free for children 6 and under. Maryhill participates in Museums for All, with admission set at $2 per person with an Electronic Benefits Transfer (EBT) card and a valid form of photo ID. Rate is valid for up to four individuals per EBT card. Admission to the Stonehenge Memorial is free; it is open from 7:00 a.m. to dusk daily.Sandwiches, salads, espresso drinks, cold beverages, and freshly baked desserts and pastries, as well as a selection of local wines are available at the museum’s cafe, Loie’s, from 10:30 a.m. to 4:30 p.m. daily; the Museum Store features art and history books, jewelry, Native American crafts and other mementos.