(GOLDENDALE, Wash., September 22, 2021) — Maryhill Museum of Art announces that Stonehenge Memorial, the iconic replica of England’s ancient original, has been added to the National Register of Historic Places. The National Register records the tangible reminders of the history of the United States and is the official repository for documentation of cultural resources worthy of preservation.

Located three miles east of the museum on a bluff above the Columbia River, Stonehenge Memorial was constructed by Maryhill Museum of Art’s founder, businessman and philanthropist Samuel Hill, between 1918 and 1929. Stonehenge Memorial is significant as both a close replica of ancient Stonehenge and as a memorial to Klickitat County men who died in World War I.

Although he clearly supported the Allied cause, Hill was a Quaker and a pacifist. In constructing the memorial, he wished to honor soldiers who gave their lives to what he saw as the folly of war and make a public statement about the tragedy and futility of the events that led to their deaths. 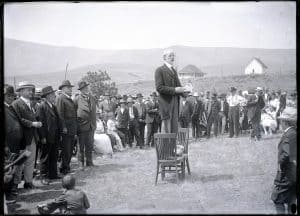 Washington historian Edmund Meany at the 1918 dedication of the altar stone at Stonehenge Memorial. Collection of Maryhill Museum of Art.

With its altar stone dedicated on July 4, 1918, more than four months prior to armistice, Stonehenge Memorial is among the earliest World War I memorials in the country and provides a lens into Americans’ attitudes toward the war at that time.

“We are thrilled that Stonehenge Memorial has been added to the National Register,” said Maryhill Museum of Art’s executive director Colleen Schafroth. “The designation recognizes Sam Hill’s singular vision and the enduring significance of the memorial as it relates to local, regional and national history. The museum itself was placed on the National Register in 1974. We are beyond excited to now have Stonehenge Memorial listed as well.”

History of Stonehenge Memorial
The origins of Stonehenge Memorial lie in a fundamental misinterpretation of the prehistoric monument on which it is based. Sam Hill visited England’s Stonehenge in April 1915, eight months after the start of World War I. He was the guest of Lord Horatio Herbert Kitchener, the British Secretary of State for War, who purportedly told him: “Here the ancients 4,000 years ago offered bloody sacrifices to their heathen gods of war,” repeating an interpretation of the ancient monolith that was commonly accepted at the time.

Hill’s understanding of Stonehenge as a site of human sacrifice led him to use the ancient monument as a model for the World War I memorial he later constructed at Maryhill. Hill seems to have conceived the idea for Stonehenge Memorial in early 1918, one year after the United States had entered World War I. He selected a bluff with dramatic views of the Columbia River to site the new memorial and envisioned it as a near-perfect replica of Stonehenge, mimicking the ancient monument’s scale, arrangement, and astronomical orientation.

Hill initially planned to use local quarried stone for the memorial, but ultimately settled on a more durable alternative. Stonehenge Memorial was constructed from cast-in-place, steel-reinforced concrete, a material Hill had previously used while building his private residences in Seattle and at Maryhill. To simulate the texture of hand-hewn stone, the wood forms for each of the memorial’s concrete elements were lined with crumpled sheets of tin.

In the spring of 1918 a number of prominent astronomers happened to be in the vicinity as Goldendale, Washington was in the path of totality of a solar eclipse predicted for June 8; Hill contacted astronomer William Wallace Campbell, director of the University of California’s Lick Observatory, and asked him to calculate the precise position of the memorial’s altar stone. Campbell agreed to make a special side trip to Maryhill to measure the memorial site.

Unlike the ancient Stonehenge, it is aligned to the astronomical horizon rather than the actual midsummer sunrise. This results in a three degree difference from the original structure. Combined with a five degree difference in latitude and the manner in which the surrounding hills obscure the actual horizon, Stonehenge Memorial is difficult to use as an astronomical calendar.

On July 4, 1918 the altar stone was dedicated with a plaque that reads: To the memory of the soldiers and sailors of Klickitat County who gave their lives in defense of their country. This monument is erected in hope that others inspired by the example of their valor and their heroism may share in that love of liberty and burn with that fire of patriotism which death alone can quench.

These men, all members of the American Expeditionary Force, represented the U.S. Army (Cavalry, Coast Artillery, Engineers and Infantry), U.S. Marines and the U.S. Navy.

When Hill died in 1931, his body was cremated and the ashes placed in a crypt just below the Stonehenge Memorial. The original crypt deteriorated in the next 25 years and was replaced in 1955 by a granite monument bearing his epitaph: “Samuel Hill: Amid nature’s great unrest, he sought rest.”

The nomination narrative for Stonehenge Memorial was prepared by Architectural Resources Group (ARG).

Learn more about Stonehenge Memorial, including the historical research and conservation work completed by ARG, in a virtual program recorded earlier this year: https://www.youtube.com/watch?v=71VTMhVoHv4

For information about how to help with the next steps of preserving this important slice of history, contact Colleen Schafroth by email at colleen@maryhillmuseum.org or call 509-773-3733 ext. 23.