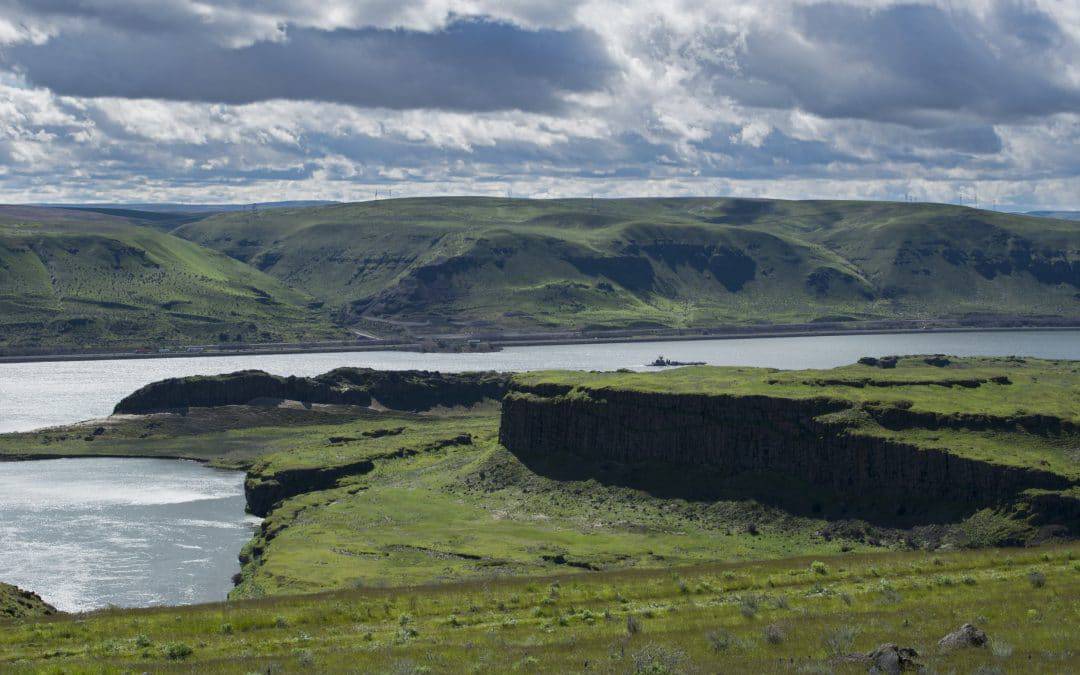 (GOLDENDALE, Wash., April 16, 2019) —Maryhill Museum of Art today announced a collaborative printmaking project featuring 11 artists working with communities along a 220-mile stretch of the Columbia River from the Willamette River confluence to the Snake River confluence. The Exquisite Gorge Project will connect artists and communities to create a massive 66-foot steamrolled print.

The unique project takes inspiration from the Surrealist art practice known as exquisite corpse. In the most well-known exquisite corpse drawing game, participants took turns creating sections of a body on a piece of paper folded to hide each successive contribution. When unfolded, the whole body is revealed. In the case of The Exquisite Gorge Project, the Columbia River will become the “body” that unifies the collaboration between artists and communities, revealing a flowing 66-foot work that tells 10 conceptual stories of the Columbia River and its people.

Artists will work with community members from their assigned stretch of river and carve images on 4 x 6 foot wood panels. Each completed panel will then be connected end-to-end and printed using a steamroller. The big steamroller print event will take place on Saturday, August 24, 2019 on the grounds of Maryhill Museum of Art and the public is invited to participate.

The resulting print will be on view in Maryhilll’s M.J. Murdock Charitable Trust Education Center from September 3 -25, 2019, with the possibility of other venues added in the future.

This project would not be possible without a range of partners along the Columbia River, who are helping facilitate the project and connecting artists with communities. The partners involved are:  Maryhill Museum of Art, Lewis & Clark College, Arts in Education of the Gorge, The Dalles-Wasco County Library, The Gorge Veterans Museum, The Dalles Art Center, Goldendale-Fort Vancouver Library System, Whitman College, and White Salmon Arts Council. Information on how the public can connect with artists will be disseminated by each of the participating partners.

“The Columbia River weaves lives together in the most amazing ways,” says Louise Palermo, Curator of Education at Maryhill Museum of Art. “The Exquisite Gorge Project brings communities together with artists to share their experience of home in the form of a woodblock print, metaphorically as big as the river itself. We envision residents becoming involved by meeting with an artist in their community, helping carve a piece of their story into a woodblock, or being part of the steamroller print event at Maryhill Museum of Art on August 24.”

Similarly, Portland artist Roger Peet, who will create Section Seven of the print, underscores the importance of collaboration in The Exquisite Gorge Project.

“I value collaboration greatly, and it is a big part of what I do in my work. Incorporating the stories, ideas, and efforts of community members into work that is narrative and explicatory is the best way to ensure a broadly effective message,” says Peet. “The stories, symbols and characters that communities contribute to projects like this provide their depth.”

Participating artists, selected through a national call for artists*, and respective sections of the Columbia River are as follows:

*Artist bios below provide more information on each artist or group.

Neal Harrington: a working, award winning woodblock print artist residing in Russellville, Arkansas, Neal’s family is originally from the Portland area. He has a Master’s degree in Fine Art (Printmaking) from Wichita State University in Kansas. His work fuses Greek/Roman and American mythologies to create an almost musical narrative.

Molly Gaston Johnson: a teaching artist at Ocean County College in Toms River, New Jersey, Molly has an MFA and over 5 years professional education in printmaking. She has a family connection to Lewis and Clark, and experience working collaboratively with communities in creating works of art.

Jane Pagliarulo: a Portland, Oregon artist, she owns Atelier Meridian, a collaborative printmaking studio. She has experience with large print formats, including “steamroller” printmaking, as well as engaging communities in these projects.

Steven Muñoz: currently working in Washington, DC, Steven has over 15 years professional experience. He is the director of a community arts center and has a BFA with a concentration in printmaking. He has experience with large format printing and has been focusing on creating a narrative about flora and fauna.

Roger Peet: a Portland, Oregon printmaker, Peet is represented in Maryhill’s collection. His work often describes the tension between human activity and the natural world. He often works collaboratively with the community in various media and produces socially focused environmental artwork.

Michael McGovern: this Portland, Oregon artist has a Masters in Fine Arts in printmaking from Northern Illinois University. He has a connection to the gorge through an artist residency at the Wasco County, The Dalles Library. He has experience in large-scale woodblock printing and community collaborations.

Lewis & Clark College / Michael Namkung: led by Professor Namkung, students from Lewis & Clark will work as the “community” in creating the design and carving the block for this project. They will be involved in the printing at Maryhill.

Whitman College/Nicole Pietrantoni: led by Professor Pietrantoni, who has experience with large, steamroller print projects, students will work as the “community” in creating the design and carving the block for this project. They will be involved in the printing at Maryhill.

Greg Archuleta: a Clackamas Chinook, Santiam Kalapuya, and Shasta, and a member of the Confederated Tribes of Grand Ronde, Greg is an artist and educator. He teaches about the culture and history of the Tribes of Western Oregon, including ethnobotany, carving, cedar hat making, Native art design, and basketry. “My art takes its roots from place, the old stories that tell how things came to be, and how the world was created for the benefit of the Chinooks of the region.”

Combat Paper/Drew F. Cameron: this group traditionally takes combat uniforms and transforms them into paper upon which prints are created. This group will work with veterans from the Columbia River Gorge to create an original woodblock of a segment of the river, led by Drew Cameron.

Ken Spiering: a professional artist and art educator, the river has been central to his art as a metaphor for the human condition. Spiering will be creating a unique frontispiece to introduce the 66’ image that follows.

Maryhill Museum of Art boasts a world-class permanent collection, rotating exhibitions of the highest caliber, and dynamic educational programs that provide opportunities for further exploration by visitors of all ages. On view are more than 80 works by Auguste Rodin, European and American paintings, objects d’art from the palaces of the Queen of Romania, Orthodox icons, unique chess sets, and the renownedThéâtre de la Mode, featuring small-scale mannequins attired in designer fashions of post-World War II France. Baskets of the indigenous people of North America were a collecting interest of Hill; today the museum’s American Indian collection represents nearly every tradition and style in North America, with works of art from prehistoric through contemporary.

VISITOR INFORMATION:
Maryhill Museum of Art is open daily from 10 a.m. to 5 p.m., March 15 to November 15. Admission is $12 for adults, $10 for seniors, $9 for college students with I.D., $5 for youth age 7-18 and free for children 6 and under. Maryhill participates in Museums for All, with admission set at $2 per person with an Electronic Benefits Transfer (EBT) card and a valid form of photo ID. Rate is valid for up to four individuals per EBT card. Admission to the Stonehenge Memorial is free; it is open from 7:00 a.m. to dusk daily.

Sandwiches, salads, espresso drinks, cold beverages, and freshly baked desserts and pastries, as well as a selection of local wines and craft beer are available at the museum’s cafe, Loie’s, from 10:30 a.m. to 4:30 p.m. daily; the Museum Store features art and history books, jewelry and other mementos.

Maryhill Museum of Art overlooks the Columbia River on Washington’s SR 14, just west of US 97, 12 miles south of Goldendale, Washington; it is a scenic 45 minute drive from Hood River, Oregon and 30 minutes from The Dalles, Oregon. Drive times are 2 hours from Portland/Vancouver, 3.5 hours from Bend, 4 hours from Seattle, and 1.5 hours from Yakima. For further information, visit maryhillmuseum.org.