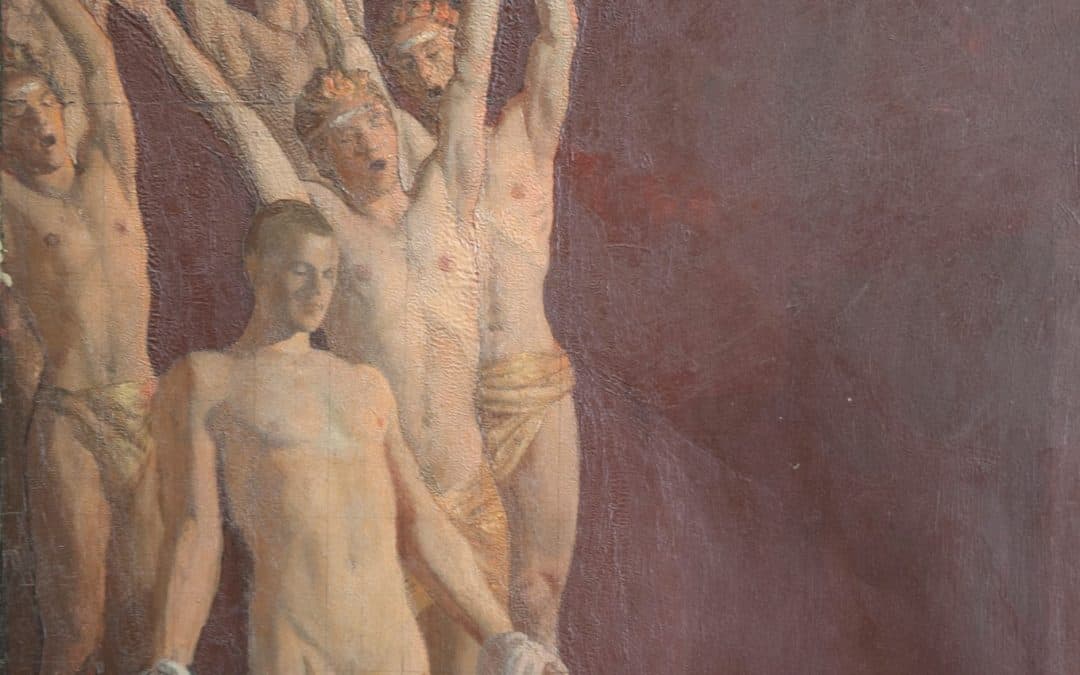 By Steve Grafe
Curator of Art

Boston artist R.H. Ives Gammell (1893–1981) painted his 23-panel series, A Pictorial Sequence by R.H. Ives Gammell Based on “The Hound of Heaven” over the course of 15 years (1941–1956). In them, the artist interpreted British poet Francis Thompson’s late-19th-century “The Hound of Heaven” poem. Those verses have been a staple of Catholic literature for more than a century and every Catholic schoolchild was once familiar with them. The poem has traditionally been read as the discourse of an individual who believes the enjoyment of earthly desires and delights must be sacrificed if he embraces God. Gammell instead illustrated the text “as a history of the experience commonly called emotional breakdown rather than as the story of a specifically religious conversion.”

In September 2021, the museum acquired a preliminary oil sketch for Panel XX of Gammell’s series. The composition is tied to line 176 of Thompson’s poem: “Rise, clasp My hand, and come.” The sketch has an inscription written on its face in the artist’s hand that says, “First thought for a panel in the Hound of Heaven series done in 1944. Retouched and mounted 1972.”

After completing The Hound of Heaven, Gammell revisited some of the themes that were not fully developed in his original series. He planned to display the smaller Fragments of An Uncompleted Cycle panels between his larger Hound paintings, and he called the littler works “The Puppies.” The artist worked on the 17 later panels until his death but did not complete enough of the series to fully complement The Hound of Heaven. The Fragments together reveal Gammell’s personal and philosophical evolution and suggest that his earlier sense of hopelessness and desperation was later replaced by more positive emotions. 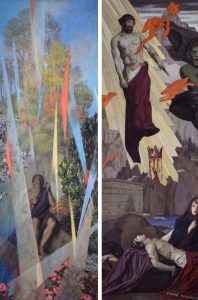 Gammell’s The Hound of Heaven paintings are now a signature part of the Maryhill Museum of Art collection. The complete series will again be displayed at the museum during the 2023 season. In the meantime, you can learn more through this online exhibition exploring the Hound of Heaven series.

In 1950, Gammell established Gammell Studios in Boston to ensure that the classical painting tradition would be preserved. As a teacher he worked with no more than three or four students at a time. By the 1960s, he was influencing a growing number of young painters and his first students were on their own, painting and, in some cases, teaching. The work of three of these artists — Richard F. Lack (1928–2009), Robert Douglas Hunter (1928–2014) and Samuel Rose (1941–2008) — are well-represented in Maryhill Museum of Art’s permanent collection. Learn about Gammell’s influence on these artists in this online exhibition.