Community and Beauty from Unexpected Places: A Yarn about Yarnbombing 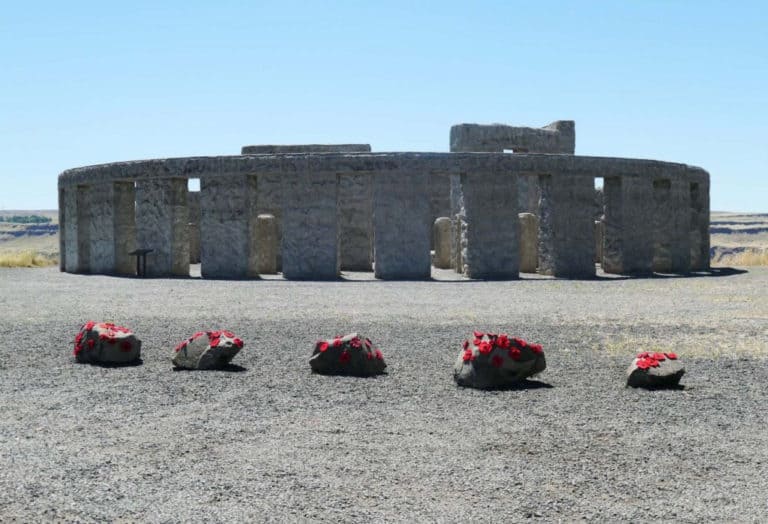 By Louise A. Palermo, Curator of Education

A yarnbomb is a type of graffiti that employs knitted or crocheted yarn rather than paint. It is meant to make a statement and challenge the way we look at something.

This colorful concept began in the US around 2005 when a shopkeeper, Magda Sayeg, adorned the doorknob of her fiber shop with a little crocheted cozy. Ms. Sayeg started a group called, “Knitta, Please” who collaborated on brightening up the spaces of their community. The group expanded internationally and today, if you are lucky, these brilliant gems might pop up anywhere…like Maryhill Museum of Art’s entrance, Goldendale Community Library lawn, and Stonehenge Memorial!

The Poppy Project Yarn Bomb at Stonehenge Memorial overlooking the Columbia River is a perfect example of the spirit of a yarn bomb. It is an artwork that seems out of place against the grays and browns of the landscape. One may be startled at seeing the proliferation of red poppies seemingly growing on basalt boulders.  It provokes a dialogue about why these iconic flowers, each crocheted uniquely, were chosen. It is an opportunity to learn about the art of our grandmothers, and their grandmothers beyond: crocheting and knitting. It is a moment to discuss the symbol of remembrance and the importance of remembering those who have served and died.

This project began humbly with the idea to bring poppies to Stonehenge Memorial. A small grant from Fiber Arts Now magazine and the collaboration of a few volunteers got the poppy-making started. (Our target finish date wasn’t until after the beginning of July, but with the help of volunteer Vonda Chandler, we were able to cover a few of the boulders in time for Memorial Day ceremonies.) On that day, the founding president of the Society of the Honor Guard of the Tomb of the Unknown Soldier, Gavin Mc Ilvenna, was in attendance. He sent an email to the President of the Daughters of the American Revolution to see if we could get a few more poppies made. A message was sent to DAR posts across the country. At the same time, a few Facebook posts asking for poppies went viral. From every corner of this country, and even a donation from Belize, poppies started arriving.

I left for a short vacation, and when I returned my office was filled with a cascade of envelopes, boxes, and bags of poppies. There are enough to finish this project and to replace it at specific holidays for a long time to come. It was overwhelming to see all the boxes, but more overwhelming still are the stories that accompanied many of the poppies.

One woman sent a single poppy with a note that she has severe arthritis but was determined to send a poppy in honor of her husband who died in World War II. Another sent the record of her father with last paragraph reflecting the telegraph her grandparents received notifying them he was killed in action. She thanked us for finding a way to keep his story alive. The stories continue from artists who want us to remember, as did Sam Hill, the folly of war, but also wanting to keep open a dialogue of honor.

While the red poppies reflect remembrance (inspired from the poem “In Flanders Field” by Canadian, John Mc Crea, printed first in England in 1915), white poppies were sent to represent peace, and a single purple poppy was sent to represent the animals who also died during wars.

Every day our volunteers showed up to sew, a plethora of visitors engaged in meaningful conversations about the beauty of the installation and also the stories of their loved ones. During our recent day installing poppies, one woman stood a short distance away just staring. I noticed tears streaming down her cheeks. She noticed me looking and asked if we were doing this for remembrance because she lost her beloved uncle in World War II, and her father fought in the Battle of the Bulge and was never the same. He died of injuries received there when she was a girl. We asked her their names and gave her a poppy to take home in their honor. We heard their story, we shared her tears.

One man thanked our group of volunteers. He had served and said this moved him deeply.

“Isn’t it amazing how art can move one deeply?” I said.

“Yes, his is an artwork that helps create dialogues with those who don’t know the significance of the poppy as a symbol of remembrance, and it also creates a dialogue about something beautiful that comes from communities working together,” I said. “Communities across this country…artists, veterans, military families. No politics. No division. A BRIDGE. Art has that power.”

The gentleman hugged me.

The Poppy Project at Stonehenge Memorial is not only a work of art, but it an act of remembrance. It will be in place until after Veterans Day 2022.

Thank you for your generous sense of Community, with a capital letter. We are a bridge. We knit souls together. We are… a yarn bomb.