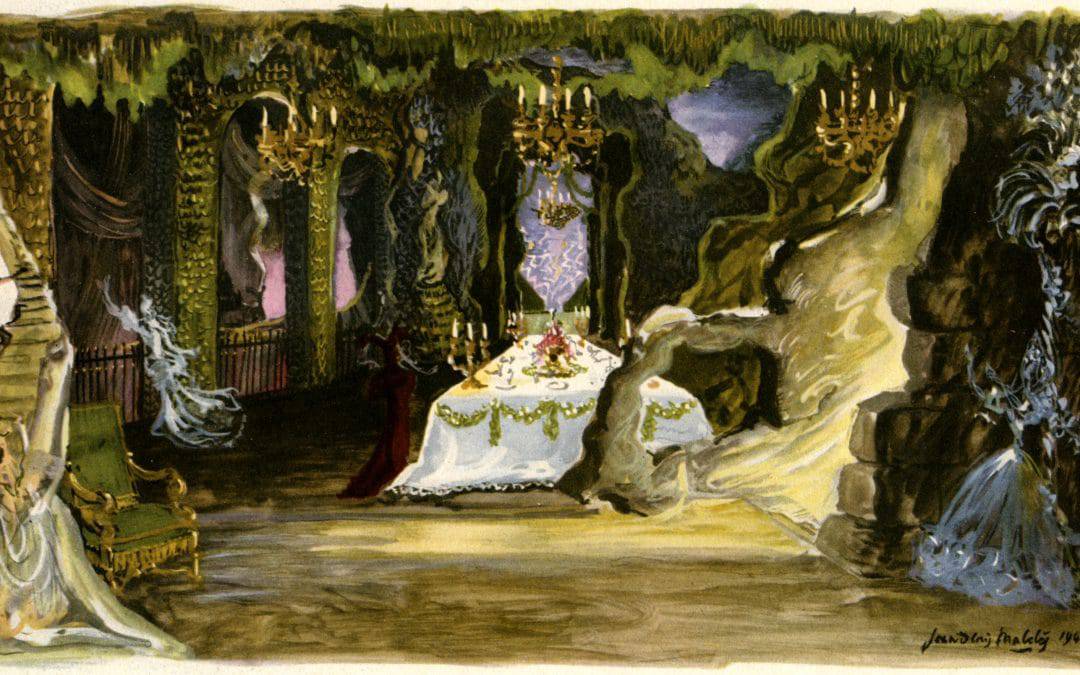 Maryhill Museum of Art is home to nine Théâtre de la Mode stage sets, and several rotate onto view every other year.  Anne Surgers replicated the décors in 1988–1990, while the miniature mannequins were being restored in Paris. They are well known to Théâtre de la Mode aficionados from museum displays and the book, Théâtre de la Mode: Fashion Dolls: The Survival of Haute Couture by Edmonde Charles-Roux, et al (2002). Eight of Maryhill’s reproduced décors are associated with the 1945 Paris exhibition.

The Fashion Dolls book shows the reproduced sets in tandem with historic 1945 photos. It also provides images of four other sets that are described as “The Lost Décors” (pp. 64-66). That may leave readers to believe that a total of 13 Théâtre de la Mode sets were created in 1945 and 1946, but that was not the case. The Paris and London versions of the Théâtre de la Mode each featured 12 stage sets. The 1946 New York exhibition catalogue suggests that fewer décors were shown in other European cities. 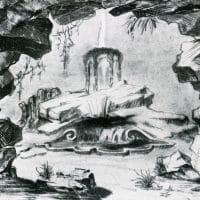 Prior to appearing in New York and San Francisco, the 1945 clothing was removed from the mannequins and replaced by new, spring/summer 1946 attire. Too, of the 12 stage sets shown in Paris and London, only five were shown in North America and three of those were modified from their original appearance. The others were newly made.

For North America, Louis Touchagues and André Dignimont produced a pair of adjacent sets showing Parisian street scenes that were together called The Street Fair.

Three complementary decors appeared as a grouping called “Paris,” and they reproduced historically important locations in that city. Those décors were L’Île de la Cité by Georges Douking; Croquis de Paris (Paris Sketch) by Jean Saint-Martin; and Place des Vosges by Georges Wakhévitch. Douking and Saint-Martin decors with the same names are in Maryhill’s current inventory, but the sets that appeared in North America differed significantly from the artist’s 1945 Paris versions. Place des Vosges is the only reproduced décor that is solely associated with the North American tour.

Three other North American sets were identified together as “Night Scenes”: Emilio Terry’s “temple of love”; Jean-Denis Malclès’ “scenery for a Comedy-Ballet”; and André Beaurepaire’s “enchanted palace.” No official titles for those décors have survived and their names as given here come from Louis Chéronnet’s 1946 New York catalogue descriptions.

Joan Rebull’s Le Carrousel (The Merry-Go-Round) décor appeared in North America, but in a different form than what was seen in Europe. Its mythical figures (mermaids, centaurs, and unicorns) were mostly replaced by cherubic children. Georges Geffroy’s Paris set (Un Salon de Style) was replaced in New York and San Francisco by interior designs created for the entry halls and a series of decorated niches in each location.

Jean Cocteau’s Hommage à Réne Clair: Ma Femme est une Scorcière (My Wife is a Witch) décor and Christian Bérard’s Le Théâtre set were the only décors that appeared unchanged in both Europe and North America. 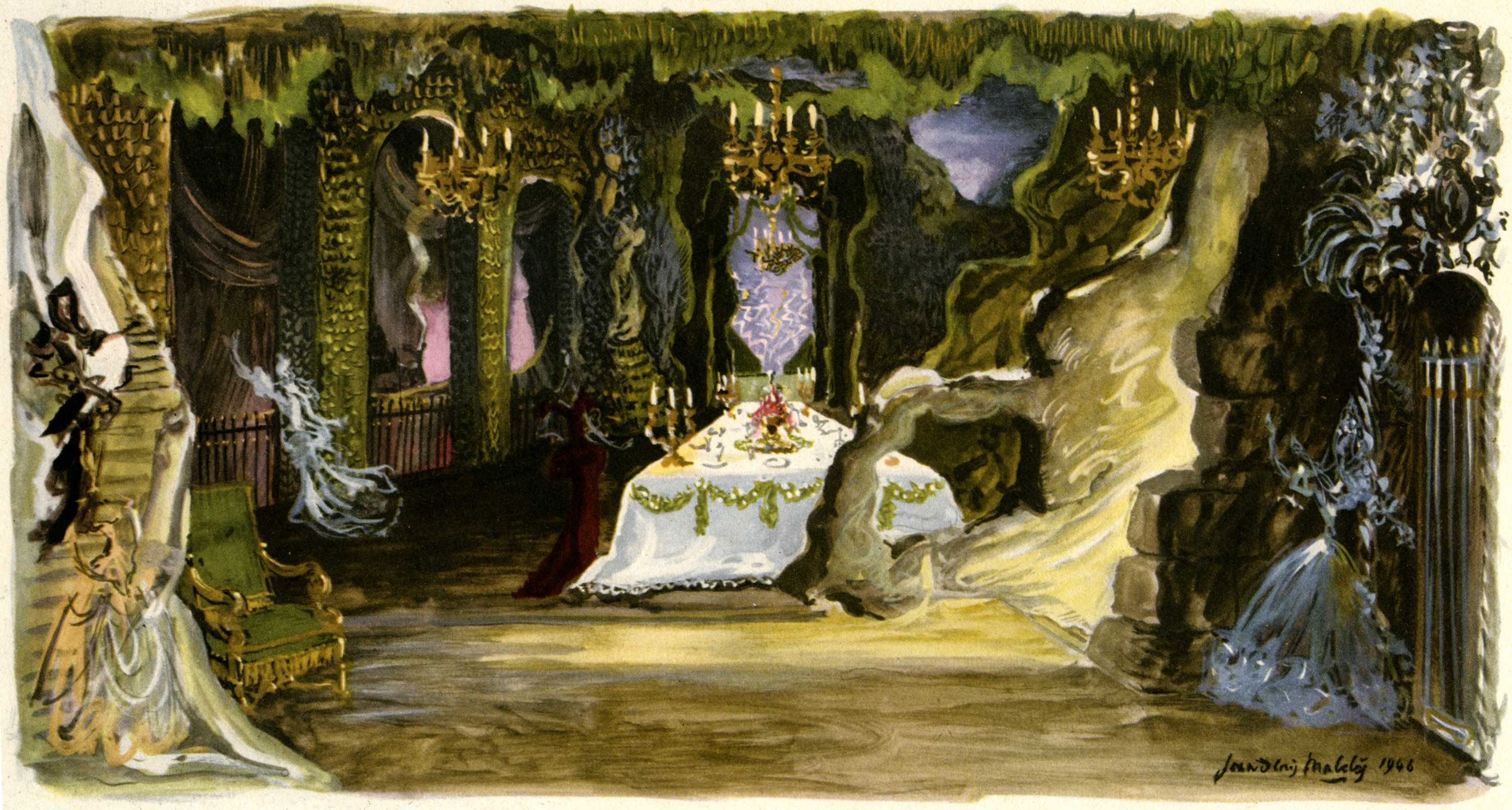 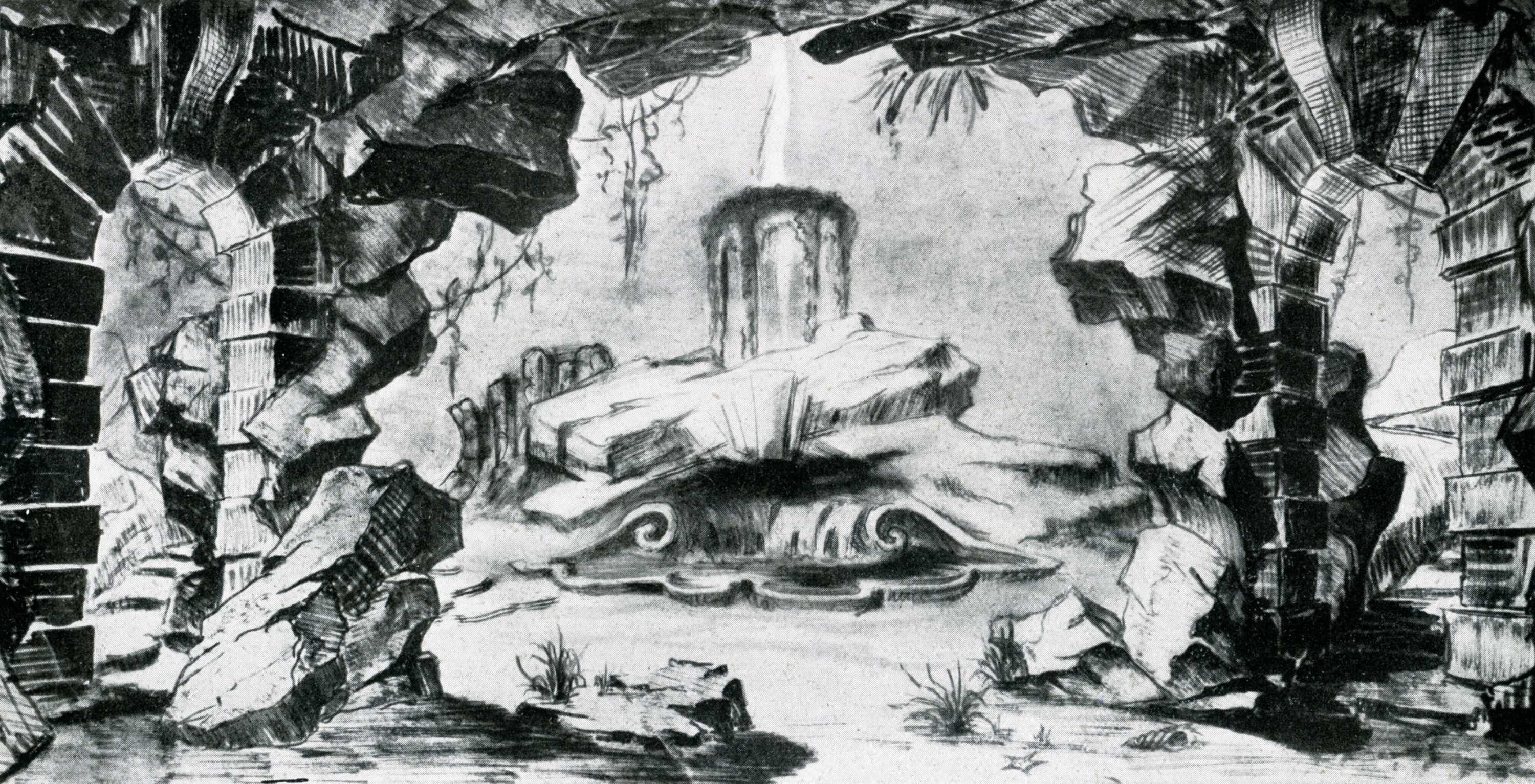 01: 1945 Geffroy At Home
Sketch for Un Salon de Style (An At-Home) décor by Georges Geffroy, from the 1945 Paris exhibition catalogue. This décor was not shown in North America in 1946