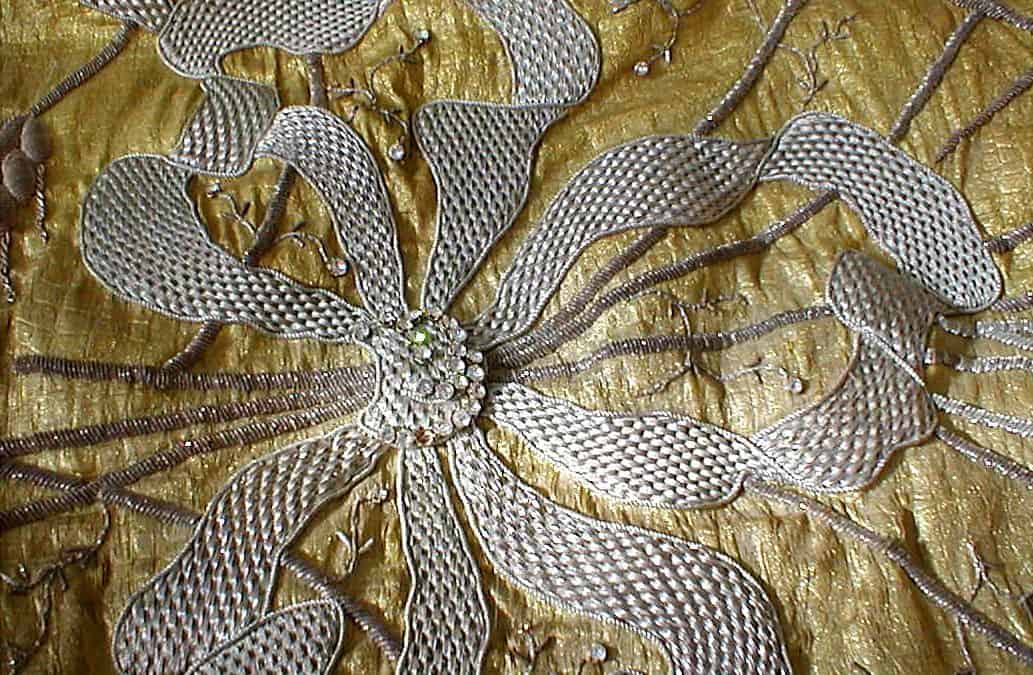 By Louise A. Palermo
Curator of Education 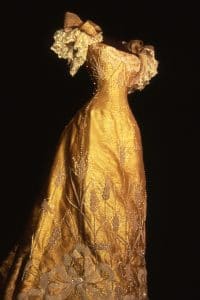 The gown Queen Marie wore to the 1896 coronation of her cousins Tsar Nicholas II and Tsarina Alexandra of Russia. Collection of Maryhill Museum of Art.

If you are one of the millions of people who recently purchased fabric to create the perfect, cheerful, “statement” anti-coronavirus face mask, history beat you to the “fashioned by disease” punch. In fact, many of the aesthetics that define “beauty” in today’s market were formed from epidemics of the past.

Let’s use Queen Marie of Romania’s golden coronation gown, on view at Maryhill Museum of Art, as an example.  Notice the 18” corseted waist; low scooping neckline, front and back; and narrow, rounded shoulders. All of these elements evolved as iconic aspects of beauty directly connected to the tuberculosis epidemic, that between 1780 and 1850 accounted for 25% of all deaths across Europe.

Tuberculosis is a wasting disease whose fatal symptoms became romanticized to represent feminine ideals of beauty in the late 18th and early 19th centuries. Excessive thinness was essential. A corset assured a tiny waist and the necessary element of shortness of breath, thereby restricting un-romantic exertion and requiring the need for a fainting couch.

Indeed, one would ideally have a ghostly pallor, flushed with rosy cheeks and red lips, highlighting your sparkling eyes. Of course, today we recognize these as symptoms of a chronic low-grade fever, but if one was not actually suffering from a fatal fashion disease, one could use powder and rouge to emulate one.

To assure a proper, rounded, stooping shoulder which emphasized collar and scapular bones by misshaping the frame and making them bulge slightly, dresses were designed to push down on the shoulders of the wearer, giving that perfect, painful posture of one beautifully close to their deathbed.

Historian Roy Porter said of the trend, “Bright young things, seeking public attention positively sought to look tubercular, as if delicacy and a tenuous grasp on life made them more appealing.” 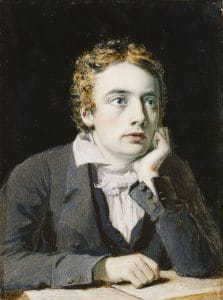 In “The Prettiest Way to Die,” an article for Literary Hub Magazine, Christina Newland,  highlights the effects of disease on romantics of the time, both male and female. John Keats succumbed to tuberculosis at age 25. In Percy Bysshe Shelley’s “Adonais: An Elegy on the Death of John Keats” he writes: “Ah, even in death he is beautiful, beautiful in death, as one that has fallen asleep.”

The Brontë sisters also lost their spectacular lives to the disease; nonetheless, Charlotte was known to say: “Consumption, I am aware, is a flattering malady.”

After 1882, when German physician Robert Koch came to understand the disease was spread by germs, fashions changed as a result. Corsets came under attack for their restriction of the lungs, replaced by more “elastic” girdles. Hemlines were raised to prevent the germs of the street being dragged into the house, and suddenly visible shoes were rendered an important high-fashion item.

Men were not left behind as fashion changed. Prior to the discovery of germs, men sported fashionable facial hair for warmth. Beards, extravagant sideburns, and sculpted facial hair were fashion trends that developed due to the lack of hygiene for shaving equipment causing serious illnesses. But a 1916 article in McClure’s Magazine warned that “Measles, scarlet fever, diphtheria, tuberculosis, whooping cough, common and uncommon colds, and a host of other infectious diseases can be, and undoubtedly are, transmitted via the whisker route.” Clean shaven became the fashion trend that followed.

We can also thank tuberculosis for the suntan trend. As fresh air became a “cure” for the disease, a trip to the seashore was needed. The resulting suntan, the opposite of tubercular pallor, became a symbol of wealth and privilege.

More recently, during the “Spanish” flu epidemic of 1918, which claimed 50 million lives worldwide, Japan suffered a death toll of over 470,000 people.  During this time, authorities suggested all Japanese people wear face masks…and the people rose to the occasion creating mask-fashion.

(Note: the first known case of this flu occurred in Kansas, USA on March 11, 1918. Spain was the only country whose press reported the epidemic, thereby giving it its name.)

Even today, designers take inspiration for fashion from the illness. Designer Nadia Pinkney worked with Dr. T. Russ from the Alzheimer Scotland Dementia Research Centre in Edinburgh to create a fashion line using the color red—the color on a PET scan indicating the non-affected brain matter.

As we work together to tackle the current pandemic, we will undoubtedly find ways to create new fashion trends. Perhaps a bright colored eye shadow above the mask-line; a bedazzled face mask; an anti-germ overcoat; or perhaps something with an elastic waistband to represent the extra time we’ve all been spending in our kitchens? But take heart, whatever the fashion, let’s wear it well.

When we re-open, visit Maryhill Museum of Art to view more fashion and costume, from the Théâtre de la Mode to Romanian textiles and more.  We look forward to welcoming you back.

Image at top: Detail of the gown Queen Marie wore to the 1896 coronation of her cousins Tsar Nicholas II and Tsarina Alexandra of Russia. Collection of Maryhill Museum of Art.