On Saturday, July 19 at 3 p.m. the museum will host a free performance of Shakespeare’s beloved comedy A Midsummer Night’s Dream, presented by Portland Actors Ensemble. From 1 to 3 p.m., visitors are invited to Chalk It Up to Shakespeare and to explore their creativity in sidewalk chalk. 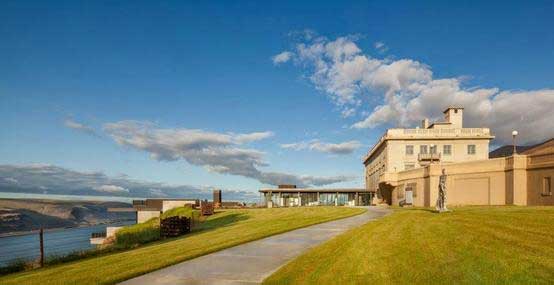 Throughout the summer months, Maryhill designates certain weekends to offer free admission to residents of select counties in Oregon and Washington; over the course of the season, every county in Oregon and Washington is included in the program. For nearly two decades, Maryhill has extended this offer to its neighbors, giving Northwest residents a chance to explore one of the region’s most fascinating cultural destinations at no cost.

“This is a great opportunity for locals and for those planning a visit to the area, to experience the museum and the new exhibits on view,” said Colleen Schafroth, Maryhill’s executive director.

It’s also a chance to explore the museum’s $10 million Mary and Bruce Stevenson Wing. Opened in 2012, it houses an education center, exhibitions, an enlarged cafe, and a terrace with outdoor seating and sweeping views of the Columbia River Gorge and Mount Hood.
Maryhill’s permanent exhibitions include more than 80 works by Auguste Rodin, European and American paintings, objects d’art from the palaces of the Queen of Romania, unique chess sets, and the renowned Théâtre de la Mode, featuring small-scale mannequins attired in designer fashions of post-World War II France. Baskets of the indigenous people of North America were a collecting interest of the museum’s founder Sam Hill; today the museum’s American Indian art collection represents nearly every tradition and style in North America, with works from prehistoric through contemporary.

Angela Swedberg: Historicity (thru November 15, 2014)
Artist Angela Swedberg’s cast and blown glass pieces, in combination with other materials, are inspired by historic and traditional art forms. Swedberg is also a well-known restorer of antique American Indian art. Sixteen of the artist’s works are featured.

The Flip Side: Comic Art by New Yorker Cartoonists (thru November 15, 2014)
The Flip Side presents work by a half-dozen artists whose cartoons regularly appear in The New Yorker magazine. The exhibition contains examples of published cartoons along with other, less well-known examples of the artists’ comic art output. The show is guest-curated by Shannon Wheeler, a Portland-based New Yorker cartoonist and author of the critically acclaimed Too Much Coffee Man.

Maryhill Favorites: The Female Form (thru November 15, 2014)
Maryhill Museum of Art’s permanent collection includes approximately 250 paintings by European and American artists. Ten or more of these works are shown each year in the Maryhill Favorites Gallery. During 2014, the gallery will feature works that highlight the use of the female form in composition. Included will be Solitude by Frederic, 1st Baron Leighton of Stretton and William McGregor Paxton’s The Red Fan, among others.